The Namsoong festival or the Lepcha community’s New Year festival is being celebrated in the first Lepcha month of Kumit Lavo. The celebration begins on the last day of Moar Lovo which is the last month of the Lepcha calendar. 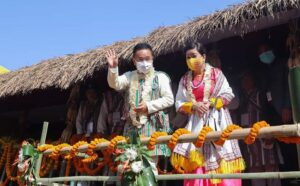 Addressing the gathering, president of Sikkim Lepcha Association Chewang Norbu Lepcha highlighted the importance of Namsoong Festival in Lepcha Culture .He also put forward various demands and expressed dissatisfaction with the work of the previous government.

In his demands Lepcha mentioned that the Daramdin’s stairway to heaven project was initiated by the previous SDF government 21 years ago but the work is incomplete till date .He also said that the present government has shown concern about the matter and also sanctioned a budget for it. He also mentioned that as per the date of completion of the project, it has to be completed by December 2022 but, due to the low budget only 79ft of 163ft is made. He also appealed to the government to increase the budget for the project.

He also put forward the demand of construction of Lepcha House or Lepcha Rong lee in Gangtok. He concluded. “I always wear traditional dress for the traditional function for the publicity of the community “he added.

He also advised government officials to wear their traditional dress once in a week. He said that this was just advice or a suggestion, and is open for public opinion and feedback.

Addressing the demands raised by Chewang Norbu Lepcha , Chief minister promised to complete Daramdin’s stairway to heaven project with 2024 and blamed the previous SDF government for its incompletion .He also Mentioned that “Hee Gyathang Senior Secondary School has been upgraded as a model school and necessary budget has been sanctioned”. He also assured to construct Lepcha House in Lumsey, Gangtok and sanction the budget in the coming assembly.